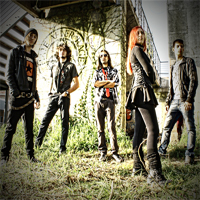 Hate After Rage (abbreviated as "HAR") is a Metalcore band from Latina, Italy. The band was founded by André Le Roux (Voice/Guitar) because he wanted to play with a group of friends he was good not only to play with but also to share many things. The band has had the same formation for some time, then many components went away because of different musical tastes and incompatibilities. Fortunately, the singer/guitarist Andrea reformed the band with Luca (Drummer), a friend known for a long time; then Davide(Bass) joined the band, presented to them by the old bass player, and finally Paolo (Guitar), the best friend of Andrea, that asked him to play for a long time. Later the band looked for a main singer and met Arianna, that happily joined the group making it finally complete. The first song played was "July Is The Best Month" to renew the sound and highlight the technique of the band.

FOR THE NEW SHAME