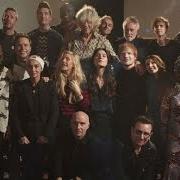 Band-Aid was a charity supergroup featuring British and Irish musicians and recording artists. It was founded in 1984 by Bob Geldof and Midge Ure to raise money for famine relief in Ethiopia by releasing the song "Do They Know It's Christmas?" for the Christmas market that year. The single surpassed the hopes of the producers to become the Christmas number one on that release. Two subsequent re-recordings of the song to raise further money for charity also topped the charts. The original was produced by Midge Ure. The 12" version was mixed by Trevor Horn.